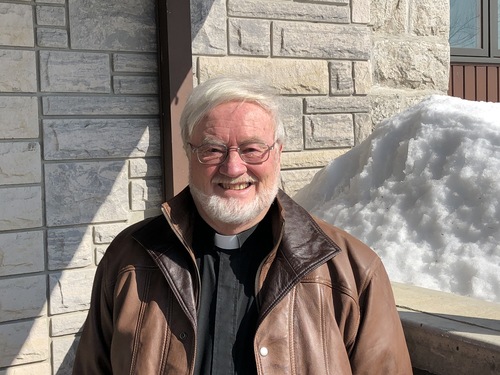 Allan Studd was ordained to the Diaconate and the priesthood by Bishop Robinson in 1979/80. He was appointed to the Parish of Petawawa and Alice in June 1981. Discovering the Ottawa Valley, he and his wife, Betty, fell in love with its beauty and with its people. He and Betty arrived that summer with an infant son (Malcolm) and by the time they left 4 years later, they had one more son (Duncan) and another child (Emily) on the way.  The 4 years in Petawawa were very busy, with planning for the building of the new Church Hall and modernizing some aspect of the historic Church, working closely with the Parish of Deep River, and being very involved with an ecumenical ministry through the Pembroke Ministerial. Lifetime friendships were forged in the Upper Valley and Allan and Betty decided that this was where they wanted to stay. They bought a piece of the Valley just outside of Eganville.

Through a previous experience in the Diocese of the Yukon, the new Bishop of that Diocese requested Allan's transfer to Yukon to be the priest for an Anglican Ecumenical parish in the mining community of Cassiar, BC. That move was affected with very careful co-ordination with Bishop Ed Lackey. In the summer of 1985, Allan built a cabin on the Eganville property so that they had a place to return to for holidays and eventually to return to live. Cassiar turned out to be a community at the end of its life cycle. The mine, around which the town had been built had reached the end of its ore body and the town gradually shrunk over the next 4 years. It was closed completely within another 3 years. Allan became more than just the priest, as a full-time ministry was not sustainable: he became a worker priest, taking on a job at the local community college, programming adult education and skills training and he was elected as a public school board trustee.

In 1989, with the fate of the town of Cassiar consigned to the pages of history, the Bishop of Edmonton invited him down to take a parish between Camrose in the west and the Saskatchewan border. Here he took on another dying parish, the Parish of St. Edmunds. The Bishop asked him to guide this parish through a process of discernment to decide what the Anglican ministry would look like in an area of rural depopulation. By end of 1991, the decision had been made – 3 churches were closed and Allan was the last full time priest.

By this time, Both Allan and Betty had dying parents in Ontario and Quebec and so they returned home to the Ottawa Valley. An opportunity arose to do an Interim at the Deep River Community Church from November 1992 to June 1993. Allan then served the United Church parish of Westmeath for one year and in September 1994, Allan accepted a position as a Chaplain on CFB Petawawa. Allan remained on CFB Petawawa until April of 2000, joining the CF and serving the Pembroke Reserve Unit 1 Air Defence Regt. and 2 Combat Engineer Regiment on the Base.

Allan received a permanent medical category in September of 2000 and the process of being discharged from the CF was begun. Part of the transition to civilian life involved mandatory retraining experience.  Allan opted for post Graduate training in Marriage and Family Therapy in Kitchener ON. Through this he became a Registered Marriage and Family Therapist and set up a private practice in Eganville. Over the years since 2000, Allan has also served periods as interim priest in Deep River, Stafford, Arnprior, Barry's Bay, St. George's (Ottawa), and Pakenham, Kinburn.

In 2016, Allan retired from his counselling practice and officially from the Anglican Church. By this time he had begun teaching in African missions, first in Ethiopia and then in Central Zambia. Through International Teams Canada and their project Impact Zambia, he continues to share his knowledge of Christian Counselling and pastoral care with people there who are anxious to learn. His trips to Zambia occur on average about once a year.

He is happy to call the Upper Valley home and to help out where he can be of service in the new Parish of the Valley.